Horizon Hobby Distributors is one of the world's finest distributors in the radio control industry today, supplying hobby shops all over North America with the best the industry has to offer. The nice people at Horizon have provided information on their new CCPM machines and the reasons behind their development.

Now that the computer radios are the norm and not the exception, designing models that utilize some of the specific mixing features is becoming more prevalent. Such it is with Cyclic/Collective Pitch Mixing and here's why . . . 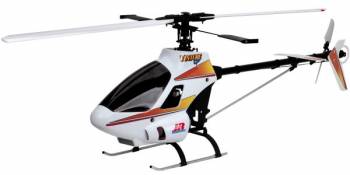 Cyclic/Collective Pitch Mixing could be a helicopter pilot's dream come true. With CCPM you have a model that is easier to build and set up, fewer and less complex linkages, more precise direct control with less backlash, lighter weight, fewer parts, three times more servo power for collective pitch inputs, and two times the servo power for cyclic control. 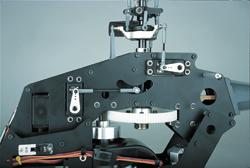 With CCPM, pitch and cyclic mixing are handled by the transmitter while each of the three servos is linked directly to the swashplate eliminating the mechanical mixer and a whole lot of ball links and pushrods. This makes building and setting up a CCPM machine easier since it uses fewer parts and needs fewer mechanical adjustments.

Because the servos are directly attached to the swashplate with short rigid links, CCPM offers a level of backlash-free precision that just can't be matched with other types of control systems. And because three servos work in unison to raise and lower the swashplate for pitch changes, three times the servo power is available in pitch while two times the servo power is available for cyclic inputs, so the swashplate is more aggressively held in its position thanks to three servos working in unison rather than independently.

A helicopter with CCPM does require a special radio that has the CCP Mixing function. Most current JR heli systems feature the CCPM software. For more information on specific JR machines that feature CCPM, check the JR helicopter lisitng.