Getting Started in Radio Control Sailplanes

One very popular category for Radio Controlled aircraft is the glider or sailplane. It is also an excellent way to get into the R/C aircraft hobby as it is less expensive and somewhat less complex than powered aircraft. Even though a glider is not powered, it can sustain flight for quite long periods of time and some glider designs can reach quite high speeds. Many gliders are light and very stable making them an excellent choice for a beginner to learn to fly.

There are two basic ways for a glider to retain or gain altitude once airborne and these are thermal lift and slope lift.

Thermal lift is created by areas of warm air rising from the land. As the land heats up with the warmth of the sun, the air above it will begin to warm by the heat radiating from the land. This is especially true over terrain such as a freshly plowed field or a paved parking area. As the air heats, it will begin to rise and allow cooler air to move in to replace it. This air, in turn, will heat up, rise, and you will get a continuous current of rising air. As long as the air is rising at a rate greater than a glider sinks while in flight, the glider can sustain lift.

Gliders designed for thermal soaring are generally of similar shape with long, slender wings for greater lift and a sleek body for low drag. Many will have wings with polyhedral (a multiple dihedral) and the tail surfaces may take several forms such as a conventional tail, crucifix tail, T-tail, or V-tail. Thermal gliders are generally grouped into four different classes.

Hand Launch — The smallest is the “hand launch” glider with a span up to 1.5 meters (59”). These models are, as the name implies, launched by hand and it is up to the pilot to remain airborne for as long as possible. It would certainly help to have a good throwing arm with these models! “Hand Launch is perhaps not the best class with which to start for the beginner as generally these models are small enough to require miniature radio equipment which is more expensive than the standard size equipment.

Two Meter — The second, and most popular size of glider is the “2-Meter” with a wingspan of up to 2 meters (78”). These models will usually accommodate standard radio equipment and require 2 channels of control – the rudder for steering and the elevator for pitch. Many have detachable wing panels for easy transportation and storage. Launching is best accomplished by either hi-start or winch as will be discussed later.

Standard Class — The third class of sailplane is the “standard class” with wingspans of up to 100”. These models will accommodate standard radio equipment of 2 to 4 channels, the additional options being flaps and spoilers. Again, launching is best accomplished by either hi-start or winch as discussed later.

Open Class — The fourth and largest size of sailplane is the “open class” and this encompasses all gliders including those over 100” in span. Again 2 to 4 channels of control are the norm and launching is best accomplished by winch as will be discussed later.

Once airborne, if lift is poor or the pilot is unskilled, the glider may only remain aloft for a couple of minutes. But if there is reasonable lift and the thermal pilot has a bit of experience, he should be able to keep his craft aloft for 5, 10, 15 minutes, or as long as there is lift.

Slope lift is generated by a breeze hitting the face of a cliff or sloping land as depicted in the accompanying diagram. As the breeze hits the vertical surface, it has no where to go but up. As with thermal soaring, as long as the upward movement of the air is greater than the sink rate of the glider, the craft will remain aloft.

All classes of glider will work well in slope lift although some are suited better than others, depending on the amount of wind. Gliders designed for thermal soaring are better suited to light winds when slope soaring unless they can be ballasted for a higher wing loading.

When there is lots of wind available, take out a glider that is designed specifically for slope soaring for a really exciting time. These craft are usually designed with shorter, swept wings, sleek fuselages, and are extremely fast and agile. Many look like jets, are capable of most aerobatic manoeuvres and will sustain flight as long as there’s a breeze! 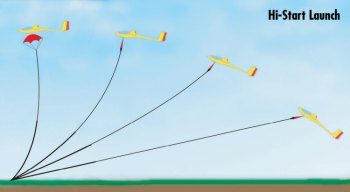 Launching a glider in slope lift is as simple as tossing the model out over the slope, however, launching for a thermal flight takes a bit more equipment. There are four basic ways of getting a thermal model into flight, a hi-start, a winch, a glow engine power pod, and an electric motor.

The hi-start is basically a very long sling-shot. It consists of a length of surgical tubing (usually 50 to 100 feet) staked to the ground at one end and fastened to about four times as much nylon line (200 to 400 feet) at the other. A parachute/ring assembly on the end of the nylon line is clipped to a hook on the bottom of the glider at approximately the center of gravity. The tubing is stretched to almost four times its length. When the pilot lets go of the model, it will soar at a very steep angle until the tubing has relaxed and the model is at peak altitude (anywhere from 250 to 400 feet). At that time, the line will drop off the hook and the parachute will guide the line back to the ground. Since launches are always made into the wind, the parachute will carry the line back toward the general location of the launch. The hi-start is an excellent choice for the beginning sailplane pilot.

The winch will launch a glider in a manner very similar to that of a hi-start, but the mechanism to accomplish this is much more complex and much more expensive. Generally winches are homemade and consist of an electric motor, powered by a 12 volt car battery, driving a drum onto which the nylon towline is wound. Again, a parachute is used for retrieval of the line. The motor is operated by a foot switch which is quite often pumped by the operator so as not to overpower smaller gliders. The power of a winch is substantially greater than that of a hi-start and that is why it is more suitable for the larger models found in “open class”.

The third method of glider launch is by glow engine power assist. This is basically a small engine mounted in a pod atop the center of gravity of the model. It is used to bring the model to altitude and then it is shut off or runs out of fuel. This is a great way for attaining very high altitudes with your model but gliding performance will suffer with a pod mounted engine due to the extra drag.

A fourth method, which has become very popular with the advancement in NiCd technology, is an electric motor launch. The electric motor is mounted in the nose of the aircraft and will quite often have a folding prop which will fold back against the fuselage to reduce drag when the motor run has completed. The motor is powered by a 6 or 7-cell rechargeable NiCd battery pack and will run for between 3 and 5 minutes. If a separate motor control is utilized, the motor may be turned on and off during flight to regain altitude if lift is poor. The disadvantage of the electric motor launch is that the extra weight of the battery will increase wing loading and reduce the glide ratio.

What You Will Need

Just as with powered aircraft, there are some glider kits that are better suited to the beginner than others. A good choice would be something in the 2-meter class requiring only 2 channels of control, a kit with a sturdy construction, and good building instructions. This type of aircraft is recommended regardless of whether you plan to thermal or slope soar. Models designed specifically for slope soaring are quite a bit faster and not as conducive to learning to fly. Save one of these for your second model.

As with powered aircraft, you have the choice of building a model completely or just doing the final assembly of an Almost-Readyto- Fly (ARF) kit. Your choice should simply be driven by your desire to build. There are a few additional items you are bound to need to complete your model, but the list is much shorter than that required to finish most powered aircraft. Refer to the Getting Started in RC Aircraft section (page 4) and Glossary section (page 8) for more discussion on accessories, components and definitions.

Along with your sailplane, you will need a radio to control it. Since many sailplanes have only two moveable control surfaces (rudder & elevator) you can often get away with a simple, inexpensive 2-channel system. Refer to our Introduction to Radio Systems section (page 19) for more information.

If you recharge before you go flying each time, you will know the condition of the batteries and won’t end up with radio malfunction due to dead batteries mid-flight—not pretty. There are some nice 2 and three channel systems available now with a single stick for sailplane operation. You may wish to convert them to NiCds, however.

One thing you may want to look for when buying your first radio is “buddy box” capability. The “buddy box” is where two radio transmitters may be connected together through a cable, the instructor holding one and the student holding the other. The student can have control over the model as long as the instructor holds a trainer switch on his transmitter. If the student gets into trouble, the instructor releases the switch and regains full control of the model. This can greatly decrease the learning time and also be good insurance against accidents with the novice pilot. Check with the local club or instructor to see if they have “buddy box” capability and if so, you may wish to purchase a compatible radio system.

There are some radios available with special functions included that are useful with more sophisticated gliders. These certainly are not necessary for the beginning modeler, however.

. . . Our Selection of Aircraft Radio Systems »

Please refer to the “tools and adhesives” section of our Getting Started in R/C Aircraft. The requirements are the same.

If you plan to do primarily slope soaring with your model, you will need virtually no field support equipment short of a few tools for minor repairs/adjustments. If you are planning to do some thermal soaring, your needs will vary depending upon which method you choose to get aloft.

Hi-Start — Launching with a Hi-start is probably the simplest and cleanest way to become airborne and, as a result, it is the most popular. The only item you will need is your hi-start. Refer to the opposite diagram for hi-start operation.

Glow Engine Power Pod — Most 2-meter gliders require a .049 engine for power pod launch. You will require one of the Cox or Norvel .049 engines, a power pod, paint or finishing material for the power pod if required, and a ˝A starter kit, which usually has everything you need including fuel, starting battery, wrench, and glow head clip.

Electric Power Launch — Many electric powered gliders come with the electric motor and prop assembly as part of the kit. The only additional items needed would be a battery (usually two, so you can fly with one battery while the other is on charge) and a fast charger that will operate from your 12V car battery while at the flying field.

. . . Our Selection of Sailplane Launch Equpment »