The radio system is your link between you and your model. They may seem complicated at first but with a little study, all aspects of the radio system can be easily understood. We will attempt to introduce you to the radio system here and explain a few of the features found on many of the systems available today.

Radios are separated into two groups, those used for model aircraft and those used for surface models. Although the operation, electronics, and mechanics for both types of systems are virtually identical, they operate on different sets of frequencies. The separation is stipulated by law and it is to protect the safety of the modeler and those in the vicinity. A flying aircraft can be dangerous if it becomes uncontrolled and the frequency separation helps avoid an aircraft being interfered with by someone operating a car or boat. In addition to a difference in frequencies, some surface radios are also available as a pistol grip control which is ergonomically easier when controlling cars and boats. A pistol grip for aircraft would be impractical.

The first criteria one usually looks for when choosing a radio is the number of control functions or channels. (Note that the term channels here refers to the number of controls and does not have anything to do with the frequency on which the radio operates.) Generally modern radio systems are available with anything from 2 to 10 channels. 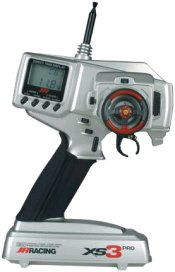 Radios used for surface models generally have from 2 to 4 channels with 2-channel units being the most popular. One channel would be for the steering of the model while the other would be for control of the speed and direction (forward or reverse). Although 2-channel radios can be found with 2 sticks for control, pistol grip radios are most popular for controlling surface models. They feature a wheel for steering and finger trigger for throttle control. Brakes are activated by using the throttle channel but pushing the trigger rather than pulling it. More than 2 channels might be desirable if your vehicle has a multiple speed transmission.

Gliders usually require 2 channels of control, one for rudder and one for elevator and any 2 or more channel aircraft system would be suitable. Additional channels may be utilized for ailerons, flaps, spoilers, etc. on more sophisticated models. These same models may also require special mixing for additional functionality. In this case, one should choose a radio with the proper mixing.

For the first time glider pilot, however, a simple 2-channel system should do just fine. At one time, these 2-channel radios took the form of 2-stick units such as those used for surface models. This was not the best arrangement for controlling an aircraft because the elevator was on one stick with an up-down action and the rudder was controlled with the other stick—side to side action. Now, single stick 2 and 3-channel radios are available with both rudder and elevator functions on the one stick.

Most radios with fewer than four channels do not come with Rechargeable NiCd batteries. It would be a good idea to convert to rechargeables for glider use.

Model aircraft may require anything from 2 to 8 or even 10 channels of control, depending on complexity. The average aircraft will generally require at least 4 channels of control, one for rudder, one for elevator, one for ailerons and one for throttle. Simpler models may omit the ailerons and some even the throttle (common with smaller 1/2A models). With no throttle in an aircraft, the model would be flown with full throttle until the fuel has run out. It would then be glided in for a landing without power. Additional radio channels may be used for things such as retractable landing gear, operating flaps, bomb drop, camera actuation, glider release, etc.

Model helicopters usually require different functions in a radio than model aircraft. Their controls are different with more mixing functions required. Usually a helicopter will operate with a minimum of 5 channels, the throttle and collective pitch channels both being controlled by one movement of the throttle control stick. Generally, radios capable of helicopter control will also have aircraft capability as well. It is simply a matter of selecting either the helicopter or aircraft program.

Typically, the right stick would control the cyclic function of the heli with the up-down movement controlling the fore-aft cyclic and the side-to-side motion controlling the left-right cyclic. The left stick would control the tail rotor with the side-to-side motion while both throttle anc collective would be the up-down motion through a mixing function. 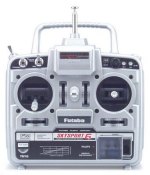 The transmitter is the control box which you hold that converts your human control movements into electrical impulses and sends them via radio waves to the receiver in your model.

The receiver is the small electronic unit in your model which converts the radio signal from your transmitter into electrical control signals which can be sent to your servos.

Servos are the devices in the model which actually produce the control movements. They convert the electrical signals from your receiver into physical movement to control your model. A different servo is required for each control function or radio channel.

Virtually all 4-channel and greater systems come complete with rechargeable NiCd battery packs for both receiver and transmitter.

A dual charger will come with any system that is complete with NiCd batteries. It will charge both the receiver pack and the transmitter pack at the same time.

A switch harness is provided to turn off the power to the receiver and servos in the model. It goes between the battery pack and receiver and also has a lead for charging.

Most radio systems will come with additional servo arms and hardware for mounting them.