Taking care of your model engines, whether they are two or four strokes, is the easiest way to ensure a long enjoyable operating lifespan for them. Here we will give you a few tips on just how to keep your little gem performing . . .

There are three basic steps one should take on a day-to-day basis to ensure you continue getting the most from your engine:

When the flying season is over, a small amount of engine care can ensure a successful beginning to the following season. 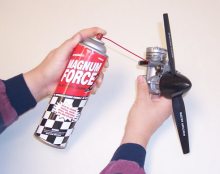 Remove your engine from the model and give it a visual check—essentially perform the same checks you would do at the end of a day. Make sure that all bolts are in place and tight. It is not necessary to disassemble the engine unless you feel that there is internal damage or that the bearings require replacing. Replace any stripped bolts or rough running bearings. Clean the entire engine with motor spray to remove all dirt. Finally, load up the engine with after run oil, turning it over to ensure that all moving internal parts are covered. This will go a long way to reducing the chance of your engine rusting in the off season. Store the engine in a baggie to keep the dirt out and the oil in!

Beginning of the Season

The first thing to do before re-installing your engine is to replace the plumbing in your model. Remove the fuel tank and take out the rubber stopper and all brass and silicone tubing. There are components in the fuel that break down brass over time and if left, the tubing will eventually crumble or at the least allow air to enter the line. Clean the residue from the tank itself with a bit of isopropyl alcohol and then install a new rubber stopper assembly with new brass and silicone tubing. Reinstall your tank.

Take your engine from its baggie and use spray motor cleaner to get the after run off the outside of the casing. Re-install your engine to the model. When you are ready to run your engine, remove the glow plug and flush fresh fuel through the engine, turning it over with your thumb over the carb. This will clear out the storage oil. Replace the plug and start your engine as normal.

In Case of a Crash

We all hate to consider the possibility, but crashes are inevitable and the more we can salvage from them, the better. Quite often the engine can fair well in a crash unless your model has gone headlong into a rock or pavement.

Crashing on land will most certainly leave the engine dirty, inside and out. DO NOT TURN YOUR ENGINE OVER! Damage to the internal workings could result from the ingested grit. It is important to disassemble the engine as soon as possible because raw fuel will be in the crankcase which will create rust damage if the engine is left any length of time. For more detailed information on engine disassembly, please refer to the various publications on model engines.

Clean all of the parts with your motor spray. Inspect each component for breakage or wear. This is as good a time as any to replace any worn parts. Once you are satisfied that everything is clean and all components are serviceable, reassemble the engine.

If you crash into water, you probably don't have any broken engine parts, nor will there be dirt, however, the water must be removed from all internal parts immediately. Remove the glow plug from your engine, empty your fuel tank and refill with fresh fuel. Using an electric starter, spin the engine over, drawing the fresh fuel from the tank, until it flushes all water from the engine through the glow plug hole. Replace the glow plug and start your engine as normal. Be sure to run the engine dry and use after run oil when you are finished.