Radio controlled models may be powered by various types of engines including electric motors, 2-cycle glow engines, 4-cycle glow engines, and gas engines. Each have their own advantages and disadvantages and all are widely used by thousands of modelers all over the world. Refer to the section Getting Started in Electric Aircraft (page 13) for more information on electric motors.

Model glow engines come in two forms 2-cycle and 4-cycle. Both use “glow fuel” which is a methanol based fuel with castor and/or synthetic oil as a lubricant. The major difference in the two types is the way fuel is delivered to, and exhaust is expelled from the engine during operation.

In a 2-cycle engine the fuel/air mixture (as metered by the carburettor) is forced into the combustion chamber during the down stroke of the piston. During the upstroke the mixture is compressed and when the piston reaches reaches the top of its stroke, the glow plug ignites the compressed gases, forcing the piston down. On the way down exhaust gases escape through the exhaust port while the fuel mixture enters the chamber. The entire power cycle takes 2 strokes of the piston.

In a 4-cycle engine the fuel/air mixture (as metered by the carburettor) is brought into the combustion chamber during the downstroke of the piston through a valve operated by the crankshaft. On the upstroke the valve closes and the mixture is compressed. When the piston reaches the top of its stroke, the glow plug ignites the mixture forcing the piston down. On the next upstroke of the piston, a second valve opens and allows the exhaust gasses to escape. The fuel mixture again enters on the down stroke. The entire power cycle takes place in 4 strokes of the piston. 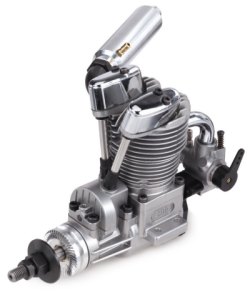 The glow plug is common to both 2- cycle and 4-cycle engines and is made up of a tiny little coil of platinum wire. To start the engine, an electric current, supplied by a 1.5 volt battery, must run through the coil to heat it. The engine is then turned over to get it running. Once the combustion cycle has started, the coil in the plug can retain heat between firing and current is not necessary.

Throttle control for R/C engines is usually accomplished via a rotating barrel in the carburettor. This barrel controls the amount of fuel/air mixture going to the combustion chamber and is activated by a small arm mounted on the side of the carburettor.

Two-cycle engines are the most common model aircraft power plant. They are simple, light, easy to operate and easy to maintain, and are generally inexpensive. They operate at a high RPM with a high pitched sound. Four-cycle engines are growing in popularity and produce a lower, more scale-like sound. They produce their power at lower RPM than two-cycle engines. Because of their valves, they have a higher part count and thus are usually more expensive than two-cycle engines. They may also require a bit more maintenance and adjustment than their two-cycle counterparts but they are not difficult to operate and maintain and they sure sound great! 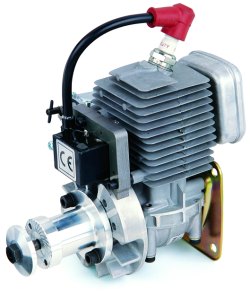 Gas powered engines (using gasoline) are becoming very popular in powering larger model cars, boats and planes. They don’t usually come in sizes suitable for medium and smaller size models, but for the large models they provide good power at a reasonable cost and are inexpensive to run. A spark plug provides the fire and no external power is required in starting. Fuel is usually a gas and oil mixture. Boat and car versions are usually equipped with a recoil pull starter for easy starting.

Where Do You Start?

For straight simplicity, ease of maintenance, overall performance and lower cost, we generally recommend that the beginner choose a two-cycle glow engine for their first model aircraft. Choose an engine that is in the upper portion of the displacement range recommended for the model. You can always throttle back and you have reserve power if you need it to get out of a spot.

You can get engines with either ball bearing supported crankshafts or with just bushings. Ball bearing engines usually have better performance, run smoother, and last longer with proper maintenance but are more expensive than those with bushings.

The piston and cylinder for model engines are generally costructed in one of two methods—ringed or ABC. At one time, ringed engines were the norm. In a ringed engine, an aluminum or iron piston with a steel ring around its perimeter, moves in an iron sleeve. The ring provides the compression when operating.

More recently the majority of engines utilize what is known as ABC construction. The term ABC comes from the fact that the first engines produced this way consisted of an Aluminum piston moving in a Brass cylinder that was Chrome plated. More recently, different combinations of metals have be used in their construction such as using an aluminum piston in a chrome-plated aluminum cylinder or using an aluminum piston in a nickel-plated brass cylinder. These engines are still often referred to as ABC, however. In all cases the piston and cylinder are matched at the factory to give a perfect fit and provide optimum compression.

Ringed engines are easy to flip start, they generate good power, are inexpensive to restore compression after long usage by simply replacing the ring, and are generally slightly cheaper. ABC engines start easily by hand, give more power than their ringed counterparts, have a good lifespan, and are less susceptible to damage with a lean run. They are slightly more expensive to buy and more expensive to restore compression if required as the entire piston/cylinder assembly must be replaced. No extended break-in is required for an ABC engine.

There are two lengths of glow plugs available. The short ones are generally used on engines of .15 cu in displacement and smaller. The long plugs are used on all engines larger than .15. Please follow the manufacturers recommendations when choosing a glow plug.