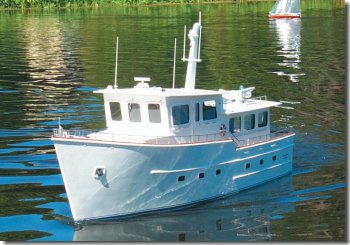 Getting Started in Radio Control Boats

Boats have been a popular aspect of R/C Modeling for many years and they take several forms: scale replicas, racing hydroplanes, deep vees, airboats, and sail boats. These may be powered by electric motors, glow engines, gas engines, or even steam engines and their construction may be from wood, fiberglass, or molded plastic.

Wooden hull boats are usually the most intricate to assemble as the hull is generally made up of many pieces of wood fitted or planked onto a framework. Care must also be taken to ensure the hull is watertight and that the wood is finished with a paint or resin to protect it from the water. Wooden boats are usually the least expensive boat kits but require the most work to finish.

Fiberglass models will come with their hulls preformed with very little construction necessary. Most of the work consists of detailing or constructing the deck and installing running hardware and radio equipment. Fiberglass kits tend to be the most expensive as much work is done by the manufacturer in laying up a fiberglass hull.

Boats preformed from ABS plastic are becoming very popular as they combine simplicity and ease of assembly with lower production costs giving you a boat that is Almost Ready to Float (ARF) costing much less than a fiberglass equivalent and requiring less work to finish. With these boats, both the hull and the deck are molded and quite often will be already joined at the factory. Not only that, many of these kits come with motor and running hardware installed with only the radio to install and the decals to be applied!

Scale boats encompass just about all kinds of boating where the model is designed to look and perform like its full size counterpart. Although a few scale boats are powered by glow, gas or steam, the majority of scale boats are electric powered. Unlike the electric hydroplanes and deep vees where speed is of a concern, the scale electrics are generally powered by lower RPM, lower amperage, higher torque motors. Six or twelve volt lead acid or gel type batteries are generally used and will give long running times of from a half hour to several hours on a single charge. Speed is controlled by either a mechanical or an electronic speed control with forward and reverse. The radio controls the speed with one channel and the steering, via a rudder, with the other.

Boating lends itself nicely to operational accessories such as lights, winches, cranes, and water pumps as the additional weight is not a detriment to performance; in fact, quite often additional weight is necessary to make the boat float at the scale waterline. These accessories can be powered with the same 6 or 12 volt battery that powers the motor and additional channels on the radio can be used for activating them. Devices are available that can be added to your radio system to allow several different functions to be controlled by one channel.

In addition to the boat kit you will usually require a two or more channel radio system (on a surface frequency), an electric motor, a speed control, running hardware including shaft and propeller, a battery, and a charger for the battery. 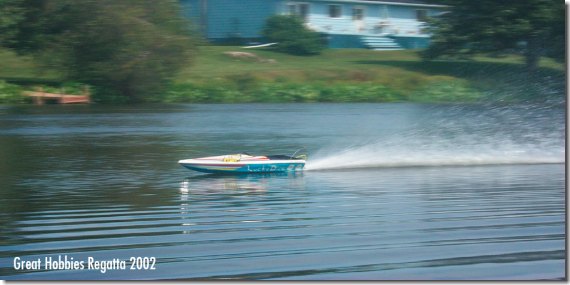 Racing Boats take several forms including hydroplanes, tunnel hulls and deep vees; each being classified by the shape of the bottom of the hull. Tunnel hulls and hydros have flatter bottoms and ride on a small surface area when up to speed. Hydroplanes ride on two side sponsons and the very aft center portion of the hull. They may use either inboard or outboard power. Tunnel Hulls run on two long sponsons which extend much of the length of the hull on either side. They are usually outboard powered as there is no center portion of the hull to support running hardware. Both tunnels and hydros require a very smooth water surface and are not suitable for choppy conditions.

The deep vee is a popular racing boat, available for either inboard or outboard power. The hull is “V” shaped and can cut through the water, maintaining speed in rough conditions. Although not as fast as the hydro or tunnel hull, it may be a better choice if your racing site has a lot of chop.

In the past, the glow engine has been the most popular power for racing boats, however, with the rapid growth in R/C car technology, electric power has become quite popular in smaller models giving excellent results. Large, gas powered deep vees are also becoming popular. They usually come with very little assembly necessary and operation is simple with pull recoil starters on converted “whipper snipper” motors!

What you need in addition to the boat kit will depend on the type of boat it is and the amount of prefabrication that has been done. Generally you will require a two channel radio (on a surface frequency), a motor appropriate to the model, running hardware, and if electric, a battery pack and charger. Electric set-ups for racing boats are usually very similar to R/C cars and you can find more information on the required support equipment in our Getting Started in R/C Cars section (page 26). Many of the electric racing boats come almost ready to run in which case the running hardware, motor, and speed control are quite often included. A few even come packaged with a radio. If you choose a glow powered boat, you will also require field support equipment for starting the engine. Please refer to our Getting Started in R/C Cars section for more information on this. Most of the equipment is identical.

Airboats are a great introduction to boating, especially for those already involved in R/C aircraft. They use almost all the same equipment used in model aircraft, including an aircraft engine, propeller, and support equipment. (Please note, you cannot use an aircraft frequency radio in your boat. Your must use a radio on a frequency for surface vehicles.) The engine is mounted on a pedestal on the back of the boat and steering is accomplished by either an air or a water rudder. In addition to your airboat kit you will require a 2-channel radio (on a surface frequency), an aircraft glow engine, and support equipment to start and run the engine. Please refer to our Getting Started in R/C Aircraft section (page 6) for more information on field support equipment. 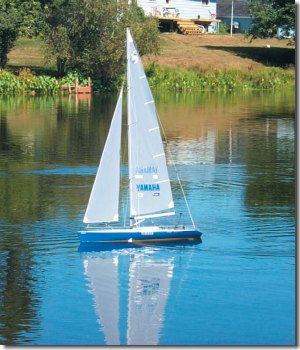 The sailboat is another popular form of boating which offers scale realism, relaxation or excitement—whichever you choose— and inexpensive operating costs. Sailboats are completely wind powered and operate the same as the full size. One channel of the radio controls the sails (main and jib) via a winch or sail arm servo. The sails can be taken in or let out according to your point of sail. A second channel controls a rudder for steering.

In many places, regattas and races are held with the boats grouped into classes where similar boats race. Sailboats are usually classed by the amount of sail area they have.

In addition to your kit, you will require a two channel radio (on a surface frequency), and for the larger models, a sail control servo or winch. There is virtually no field equipment required for most sailboats.